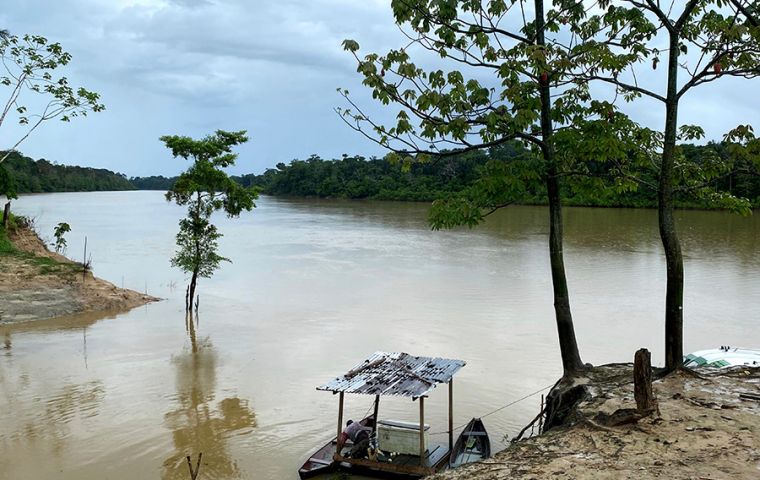 BRASILIA, June 22 (NNN-MERCOPRESS) — The boat British reporter Dom Phillips and local indigenist Bruno Araújo Pereira were riding when they were ambushed and killed has been retrieved from the bottom of a river, Amazonas Civil Police announced Monday.

It had been submerged about 20 meters deep in the Itacoaí River, near the community of Cachoeira (AM). At least six sandbags had been attached to it so that it could not be found.

Along with the boat were found a 40 hp motor and four drums that were used by Bruno, as explained by the delegate Alex Perez, from the 50th Police Station of Atalaia do Norte (AM).

The exact location was pinpointed by Jeferson da Silva Lima, alias Pelado da Dinha, who was arrested Saturday for his suspected involvement in the murders of Bruno and Dom, whose remains were found June 15.

The place where the “human remains” were buried – as designated by the security forces – was revealed by fisherman Amarildo da Costa Oliveira, alias Pelado, who had been the first suspect arrested for his participation in the crime and who, according to the Federal Police (PF), has confessed to his involvement in the crime. Pelado’s brother Oseney da Costa de Oliveira, known as Dos Santos, was arrested June 14.

The remains were buried about 3 kilometers from the Itacoaí river canal.

Besides the three suspects already in custody, the Federal Police is investigating the participation of other five people in the hiding of the bodies.

The União dos Povos do Javari (Univaja) for which Bruno worked since being on unpaid leave from the National Indian Foundation (Funai) claims to have passed on information to the Police about criminal organizations operating in the region and that could be behind the killings.

“We demand the continuity and deepening of the investigations. We demand that the PF consider the qualified information that we have already passed on to them in our letters. Only then will we have the opportunity to live in peace again in our territory, the Javari Valley,” Univaja said.

Phillips and Araújo Pereira were last seen on the morning of June 5 in the indigenous reserve of Vale do Javari, the second largest in the country, covering over 8.5 million hectares. The area is home to the largest number of isolated or recently contacted indigenous peoples in the world. They were on their way from the riverside community of São Rafael to the city of Atalaia do Norte (AM) when they disappeared without a trace.

Pereira was working as a contributor to the Union of Indigenous Organizations of Vale do Javari (Univaja), an entity maintained by the indigenous people of the region, and was focused on preventing invasion of the reserve by fishermen, hunters, and drug traffickers. — NNN-MERCOPRESS