Home - Americas - US: Rosenstein exiting no. 2 post at Justice Department 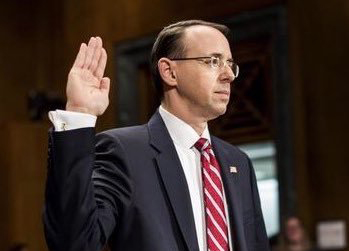 The resignation is effective May 11, Rosenstein said in his letter. That gives the Senate a little less than two weeks to confirm Jeffrey Rosen, the Transportation Department’s No. 2 official whom Trump has nominated to replace Rosenstein.

“I am grateful to you for the opportunity to serve; for the courtesy and humour you often display in our personal conversations; and for the goals you set in your inaugural address: patriotism, unity, safety, education and prosperity,” Rosenstein wrote to Trump.

“The rule of law is the foundation of America. It secures our freedom, allows our citizens to flourish, and enables our nation to serve as a model of liberty and justice for all,” he added.

It was Rosenstein’s decision to appoint Special Counsel Robert Mueller, whose two-year investigation into Russian meddling in the 2016 presidential election and allegations of collusion between Trump’s campaign team and Moscow provoked the president’s rancour.

Former Attorney General Jeff Sessions had recursed himself from matters pertaining to Russia, setting the stage for Rosenstein to make the appointment in May 2017, a fact that Trump repeatedly fumed about in private and in public.

Rosenstein was expected to resign in March but stayed on to assist Attorney General William Barr, who took office in February, ahead of the public release of Mueller’s findings.

Barr said in a statement that Rosenstein’s “devotion to the Department and its professionals is unparalleled”.

“Rod has been an invaluable partner to me during my return to the Department, and I have relied heavily on his leadership and judgment over the past several months.”

Rosenstein previously served in the Justice Department as a prosecutor, deputy assistant attorney general and US attorney in a career that spanned three decades.