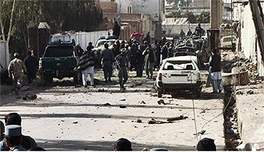 As a Taliban-linked group of militants, the Haqqani network mostly operates in eastern provinces and the capital Kabul, and has been responsible for many high-profile attacks against security forces.

Earlier today, the Afghan Special Forces arrested two Taliban militants in Nawa district of Ghazni province, according to the statement.

Eight Taliban militants were killed by an air strike conducted by the ANASOC in Sherzad district, of neighbouring Nangarhar province, late on Friday, the statement added.

There are casualties on the security forces and civilian sides during the raids.

The Afghan security forces, backed by the NATO-led coalition troops, have increased ground and air offensives against militants within the past few months, as spring and summer, known as the fighting seasons are drawing near.

The militant groups have not made comments on the reports, so far.– NNN-AGENCIES

11 Killed In Bus Accident In Kazakhstan