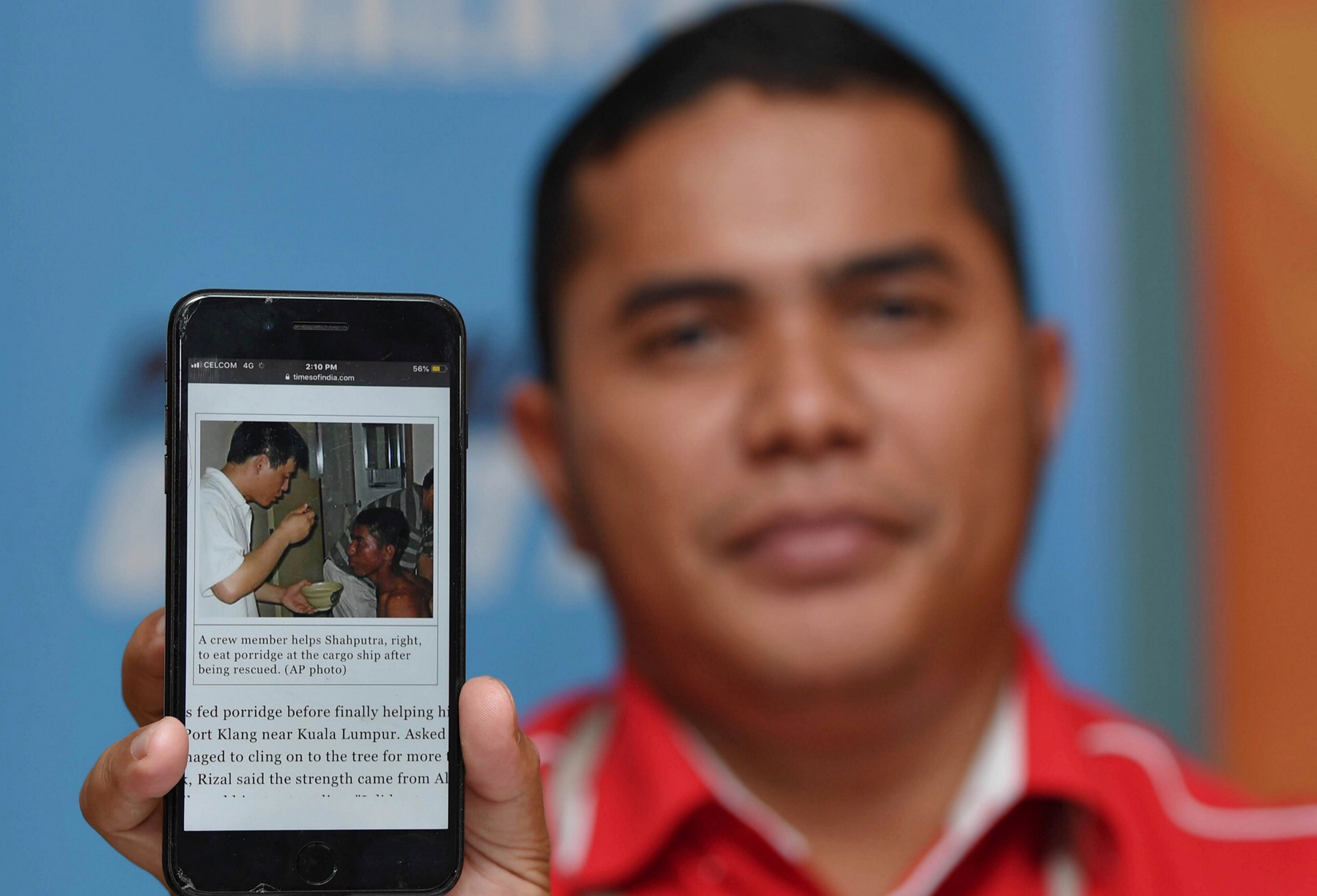 KUALA TERENGGANU (Terengganu, Malaysia) April 18 (NNN-BERNAMA) — ‘It’s like being given a second chance at life”, said Rizal Sahputra Abdul Hamid (pix), who was rescued at about 100 nautical miles from Banda Aceh in Indonesia after being adrift for nine days in the Indian Ocean during the tsunami 15 years ago.

The massive Indian Ocean tsunami, which sent waves as high as 30 metres, crashed into 14 countries and claimed about 250,000 lives.

Thanking Allah for sparing his life, Rizal Sahputra, 34, said he also owed his life to a former captain of a Japanese cargo vessel, MV Durban Bridge, and a crew member on board.

“They were the ones who took care of me during the five days I was on board their ship before I was brought to Port Klang, Selangor,” he added.

He is now seeking for help from the local and international community to find the two men and all he has of them are two pictures, one of the crew member feeding him, and the other when they arrived at Port Klang, from newspaper cuttings.

“The crew member asked for my permission to keep the shirt and trousers that I was clad in when i was found, and said he wanted to keep them as a memory, and in return, gave me new clothing,” he added.

In an interview with Bernama recently, Rizal Sahputra said the crew member was the one who bathed and fed him everyday while he was on board the ship.

“He also carried me to the bathroom because my legs were injured and both my arms were broken.

“Despite communicating with him ‘like a chicken and a duck’, I was made to understand that the ship captain was the first person to see me floating in the sea and then got his team to rescue me.

“Imagine, among the many vessels that passed-by since the fourth to ninth day that I was adrift in the sea, only MV Durban Bridge saw me,” he added.

Rizal Sahputra, who is now the chief operating officer of UCSI University, Terengganu Campus, said MV Durban Bridge was on its way to Malaysia and Singapore from South Africa when the captain spotted him.

He said he had been trying to locate the two men since a few years ago and had been to the Japanese Embassy in Kuala Lumpur in 2008 and 2009 to look for information on them, but the efforts were futile.

He also went to Port Klang in 2006 and 2009 after being informed that MV Durban Bridge would berth there.

“Unfortunately, the new captain said they did not have the record of the previous employees and the crew onboard then were also all new,’ he added.

Recalling his experience during the 2004 tsunami, Rizal Sahputra said it started with a strong quake before huge waves came crashing on land.

“The third day after was the saddest when I saw thousands of bodies surfacing and floating in the ocean,” he said.

Rizal Sahputra said the tsunami wiped out his family, except a brother, Ronal Sahputra, 36, and also his village, Calang, near Banda Aceh, left with only 17 survivors.

“When I returned to the village, I no longer knew the place. An international television crew took me back there about May 2005, but I returned to Malaysia because I could not control my emotions and am still traumatised by the incident,” he added.

He said a house was built at the site where his family home was located to provide free accommodation to the needy.

The family coconut plantation is also managed by the local residents and the harvest given out as alms to the poor and needy, he added.

Rizal Sahputra, who is now married to an Aceh woman and has a child, said he was sent to Tengku Ampuan Rahimah Hospital in Klang, Selangor, after his rescue and became a foster child of then Deputy Indonesian Ambassador to Malaysia Abdurrahman Mohammad Fachir.

He said it was Abdurrahman who encouraged him to continue his studies, which he did, and in 2011 obtained his degree in English and communication.

“In early 2012 I went back to Aceh to take care of a cousin who was down with cancer. I did odd jobs, including as a fish monger. I also took a job as a government officer in Aceh, but it was only for a month.

“In May 2012, after my cousin’s condition improved, I went to Jakarta to work at the UCSI branch there and in January 2013, came back to Malaysia,” he added.

Rizal Sahputra obtained his Master’s degree in Business Administration in 2016 and is pursuing a doctorate in Business Management at UCSI. (photoBERNAMA)