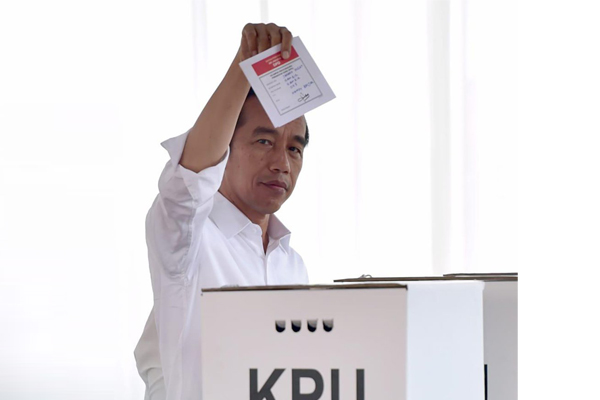 Based on quick counts conducted by survey organisations in Indonesia, the pair is having a comfortable lead over challengers, Prabowo Subianto and Sandiaga Uno.

A total of forty independent organisations have registered with Indonesia’s General Election Commission (KPU) to carry out quick count at Pilpres 2019.

Quick counts are unofficial results with the organisations using the results of selected polling stations (TPS) as samples for quick counting processing.

The survey bodies are using the voting counting samples in 3,000 to 6,000 selected TPS according to their criteria.

However, Prabowo in a press conference broadcasted live by a local television station claimed the quick vote count conducted by his party showed his team leading with more than 50 per cent of the vote in Pilpres 2019.

Jokowi in a press conference while monitoring the quick count at Djakarta Theatre said even though the quick count showed he had won, the people of Indonesia need to wait for the official results from General Election Commission (KPU).

Indonesians on Wednesday voted in the 2019 general election to choose the president of the third largest democratic country in the world.

More than 192 million registered Indonesian voters are eligible to cast their ballots to choose their president for the 2019-2024 term.

More than 780,000 voting centres opened from 7am to 1 pm throughout Indonesia.

The 2019 Indonesian general election is held simultaneously for the first time to elect the President for the 2019-2024 term (Pilpres 2019) and the election for 711 members of the People’s Consultative Assembly (MPR), 575 members of the People’s Representative Council (DPR), 136 Regional Representative Council (DPD) members as well as 19,500 legislators involving more than 2,000 districts and municipalities.

The focus is on Pilpres or the Presidential Election with incumbent President Jokowi, 57 going for his second term with a new teammate, Ma’ruf Amin, 76, an influential cleric as the vice-President candidate.

The pair of Jokowi-Ma’ruf was being challenged by former armed forces chief, Prabowo, 67 with former Jakarta deputy governor, Sandiaga, 49, as his running mate.

Based on the 2014 Indonesian election, the quick counts conducted by these bodies were almost 99 per cent accurate.

The official results of 2019 general election would only be announced by KPU progressively from April 25 to May 22, 2019 while the official announcement of results for the President and vice-President is scheduled on Oct 20, 2019.