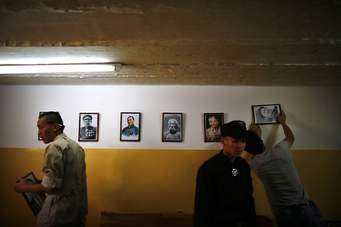 “This year marks the 70th anniversary of the establishment of diplomatic ties between China and Mongolia. The exhibition is part of a series of activities to celebrate the friendship between the two countries,” Khasbagana, deputy director of the Chinese Cultural Centre in Ulan Bator, said, at the opening ceremony.

Within the framework of cultural cooperation between the two countries, Chinese workers renovated the Choijin Lama Temple Museum in 1961, said Dugarsuren Otgonsuren, director of the temple museum, adding that, this is the most extensive renovation work in the history of the temple museum.

“So, we are organising the photo exhibition to remember the historic work done by Chinese workers and celebrate 70 years of solid friendship between Mongolia and China,” she said.

The three-day exhibition, at the Chinese Cultural Centre, features more than 50 photos, showcasing the temple museum’s history and the renovation work done by the Chinese workers.– NNN-MONGOLIA WEB