Uruguay braces for a “cyclone with unusual characteristics”, meteorologists forecast 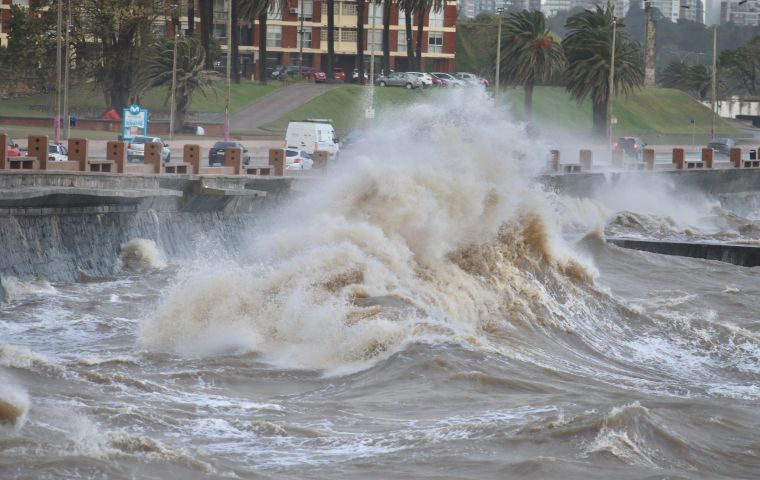 MONTEVIDEO, May 17 (NNN-MERCOPRESS) — Although cyclones are rare in the area, Uruguay’s Institute of Meteorology (Inumet) has issued a yellow warning regarding the possible arrival of a subtropical cyclone to the southern part of the country sometime Tuesday.

The only time one such phenomenon was ever recorded was 15 years ago, but it did not make landfall.

Inumet Director of Meteorology and Forecasting Néstor Santayana explained that although on that occasion atypical weather activity was noted, there was never a risk of it affecting Uruguay. “It is something very unusual,” he said.

“The atmospheric depression begins to deepen over the southeast of the national territory, generating sustained winds between 50-60 kilometers per hour, with gusts 60-80kilometers per hour. The wind will gradually increase from the SW towards the E of the country. This situation will be accompanied by showers. The situation will continue to be monitored and will be informed in case of possible changes,” says the Inumet warning.

In that scenario, education authorities in the departments (provinces) of Maldonado and Rocha suspended all school activities. Maldonado -where Punta del Este is- and Rocha are the areas under the most serious threats, National Director of EmergenciesSergio Rico said in a TV interview.

Inumet also suggested residents stay updated on the weather forecasts, while the National Emergency System (Sinae) has made a series of recommendations to avoid risky situations, which include:

– Avoid fake news
– Keep cell phones charged but use them only in case of emergency so as not to congest communications
– In case of strong winds: remove objects that may be blown away. Take shelter in the most protected room of the house and keep pets in protected places.
– In the event of a thunderstorm: avoid staying in open spaces, stay away from metal structures, do not take shelter under trees, and unplug all household appliances.
– In the event of heavy rains: do not cross flooded roads or bridges, and avoid driving at night or on main roads.

Traveling by car, motorcycle, or on horseback does not reduce the risk of being swept away by water currents. — NNN-MERCOPRESS