13 Injured After 12 Coaches Of Train Derail In India 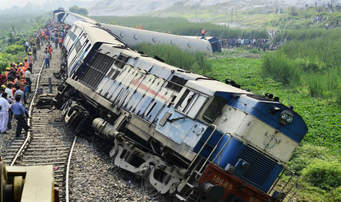 According to officials, 12 coaches of Delhi-bound Poorva Express derailed near Kanpur Nagar in Kanpur district, about 103 km west of Lucknow, the capital city of Uttar Pradesh.

“In the accident 13 people have been injured and they have been admitted to a hospital in Kanpur,” a police official posted in the district, said.

“Twelve bogies of the Howrah-New Delhi Poorva Express derailed during the night, near Rooma railway station here.” According to police, the train derailed at around 1:00 a.m. (local time) on Saturday. A senior northern railway official, Gaurav Krishan Bansal, told state-run broadcaster All India Radio (AIR) that, no death was reported in the accident.

Officials have diverted 13 trains and cancelled one on the route. “The diverted rail traffic will be restored soon,” Bansal was quoted as having said.

Following the accident all senior rail officers rushed to the spot. Reports said, a team of India’s National Disaster Response Force was also sent to the spot. The Indian government, in 2015 announced an investment of over 137 billion U.S. dollars, over a period of five years, to boost railways and modernise it on new lines.