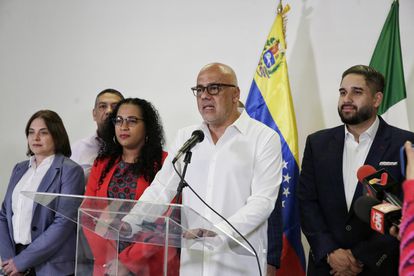 MEXICO CITY, Nov 28 (NNN-Xinhua) — The Venezuelan government and a sector of the opposition, the Unitary Platform coalition, reached a second partial agreement here for releasing blocked resources after a standoff that lasted over a year, the head of the government’s delegation said.

The two sides, with an aim to ease the economic woes and political stalemate in the oil-rich country, resumed talks after a suspension in October 2021 and signed a humanitarian agreement on Saturday to facilitate the well-being of the Venezuelan people.

“Through this agreement, we are retrieving more than 3 billion dollars that will go directly towards the financing of education, health, electricity, to caring for the victims of the tragedies caused by the torrential rains that Venezuela has suffered,” Jorge Rodriguez, head of the government’s delegation, told local reporters.

The recovered resources will be invested in 2,300 schools throughout the country, allocated to promote the country’s health industry, as well as be used to improve the national electrical grid, Rodriguez said.

The resources will be placed in a fund created by the United Nations (UN) and administered by Venezuela and its mechanisms, said Rodriguez, who is also president of the National Assembly, noting that the international financial system has frozen more than 20 billion dollars of Venezuelan resources.

In a statement on Saturday, UN deputy spokesman Farhan Haq said Secretary-General Antonio Guterres was committed to supporting the two sides in implementing the deal, calling it “an important milestone that has the potential to deliver broader benefits for the people of Venezuela.” — NNN-XINHUA