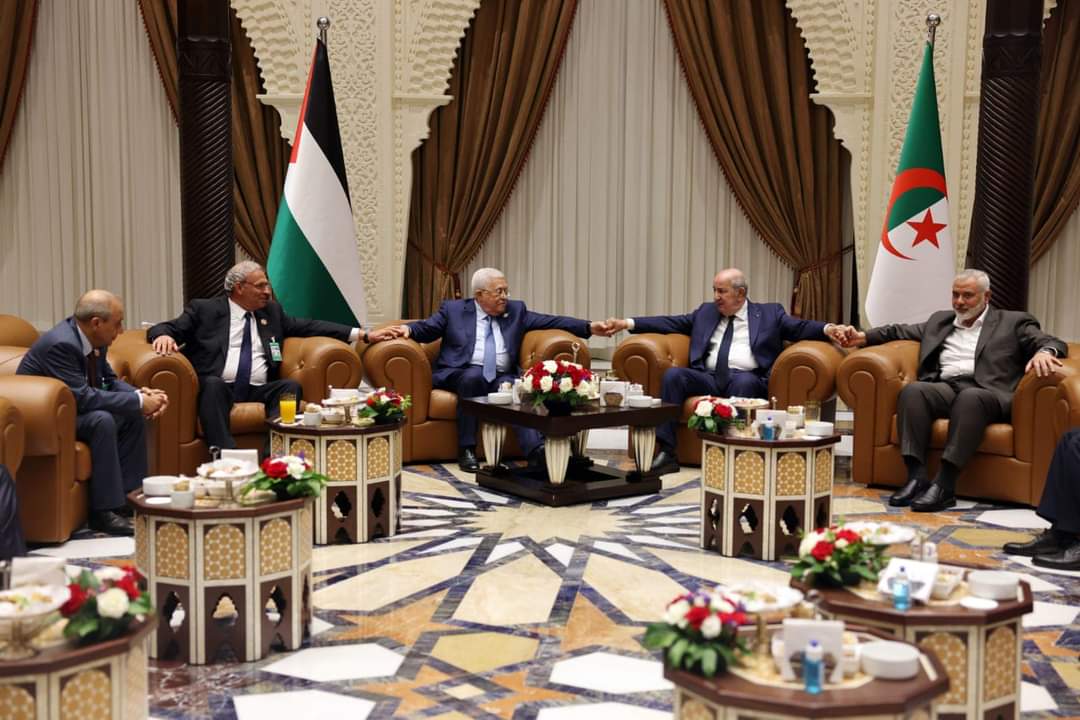 A photo released by the Palestinian presidency showed Algerian President Abdelmadjid Tebboune sitting between Abbas and Haniyeh in a meeting room with Algeria’s green-and-white national flag in the background.

The meeting was broadcast on the Algerian TV channel TV3, which showed the three leaders holding their hands.

The pro-Hamas Al-Resalah news website reported that the meeting between the two rivals was organized by Tebboune on the sidelines of the celebrations marking the 60th anniversary of Algeria’s independence from France.

Haniyeh, who has been living in Qatar for more than three years, headed a Hamas delegation to Algeria upon the official invitation of Tebboune to join the Algerian independence celebrations.

President Abbas and a high-ranking Palestinian delegation were also invited by Tebboune to participate in the celebrations, according to the official Palestinian news agency.

Thanks to Algerian President Abdelmadjid Tebboune, who “invited the two leaders on purpose,” the meeting between Abbas and Haniyeh was made possible, said Gaza-based political analyst Husam al-Dajjani.

“Tebboune is expected to persuade both Abbas and Haniyeh to resume their dialogue and end around 15 years of internal Palestinian division and achieve internal reconciliation,” he said.

Arab mediators have so far been unable to end the internal division between Abbas’ Fatah Party and Hamas. The two rivals had reached a series of understandings and agreements sponsored by Egypt, Qatar, and Saudi Arabia which had never been implemented.

The internal Palestinian division between Hamas and Fatah began in 2007 when Hamas forcibly took over the Gaza Strip from Fatah. Since then, the Palestinian territories have been split into a Hamas-controlled Gaza Strip and a Fatah-dominated West Bank. — NNN-XINHUA

Datuk Seri Dr. Michael Yam Appointed As The President Of The Chartered Institute Of Building (CIOB)