RAMALLAH, May 26 (NNN-WAFA) – Palestinian authorities, yesterday urged the Israeli regime, to call off “the provocative flag march,” scheduled to be held in Jerusalem this Sunday.

Palestinian presidential spokesman, Nabil Abu Rudeineh, warned that, by allowing the Israeli flag march, to pass through Islamic neighbourhoods in East Jerusalem “would lead to tension and violence.”

“The Israeli regime underestimates the determination of the Palestinian people and their leadership, who can withstand and challenge the Israeli insistence, to organise the march of flags in the old city of Jerusalem,” Abu Rudeineh told reporters.

He held the Israeli regime “fully responsible for this escalation that would flame tension and violence,” adding that, “the Palestinians can defend Jerusalem and its Islamic and Christian sanctities.”

Abu Rudeineh called on the United States to take a clear and explicit stance, towards the Israeli provocations and remove ambiguity in Palestinian-American relations, by implementing its words and preserving its credibility under international law.

Earlier yesterday, Israeli media reported, the Israeli Police ordered a state of alert in Jerusalem and Israel, for fear of an outbreak of tensions, when the flag march is organised on Sunday.

Last week, the Israeli police agreed to allow the flag march, to pass through the Damascus Gate and the Islamic Quarter in East Jerusalem.

In May, 2021, the flag march sparked military tension between Israel and the Islamic Resistance Movement (Hamas) in the Gaza Strip, that lasted for 11 days. More than 200 Palestinians and about 10 Israelis were killed.– NNN-WAFA 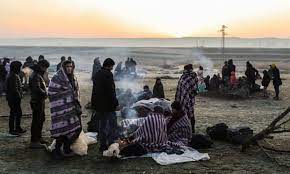