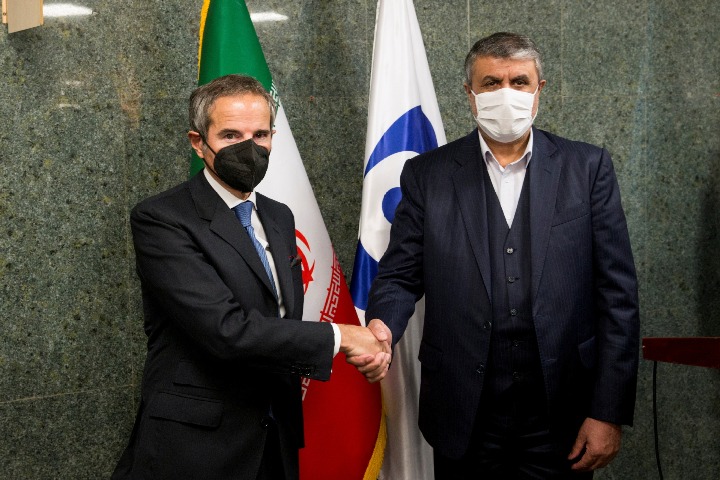 TEHRAN, Nov 24 (NNN-IRNA) – Iran and the International Atomic Energy Agency (IAEA), yesterday announced that, they have agreed to continue their negotiations and cooperation, in the areas of common concerns.

At a televised joint press conference, which followed a meeting at the AEOI venue, Grossi and Eslami announced, they would continue negotiations until remaining disputes are resolved.

Eslami said, the agency had some questions to Iran “based on the documents published by our enemies,” adding that, “some questions have been answered and some others remain.”

The head of the AEOI said that, “parts of these questions were addressed and closed” in the 2015 nuclear deal, officially known as the Joint Comprehensive Plan of Action (JCPOA).

“We agreed today to end these issues … the negotiations of which are still ongoing,” he added.

The Iranian nuclear chief stressed that, Iran aims to utilise nuclear technology in various sectors, and “the agency will help us in this regard.”

“We have a plan to build at least 10,000 MW of nuclear electricity production capacity in Iran, especially by small power plants, each with a maximum capacity of 300 MW,” Eslami said, adding that, he hopes the agency will persuade and support the countries, which have the technology to help Iran develop its nuclear power capacity.

For his part, Grossi, who arrived in Tehran on Monday, said that the two sides, during his last Tehran trip in Sept, had “agreed to continue our joint work on the clarification of a number of issues and continue and deepen the dialogue with the government of Iran.”

Grossi also described his visit to Tehran a sign of determination to hold talks, mutual understanding, resolve problems and boost cooperation with Iran, announcing the agency’s readiness to resolve the remaining issues in the coming months.

In similar remarks, the Iranian foreign minister urged the UN nuclear watchdog to deal with “technical issues” relating to the Iranian nuclear programme and to remain “technical, professional and neutral” in this regard.

Amir Abdollahian, in his meeting with Grossi, stressed the seriousness of his country to interact constructively with the IAEA, within the framework of the Safeguards Agreement, expressing the hope that during Grossi’s visit “mutual trust and cooperation” would be strengthened.

Prior to his arrival in Tehran, Grossi had expressed the hope that during this trip to Tehran, he would be able to establish a “fruitful and cooperative channel of direct dialogue,” so his agency can resume “essential verification activities” in the country.

The meetings yesterday came, ahead of the IAEA’s 35-nation Board of Governors’ meeting today, about a recent report pertaining to Iran’s nuclear programme and a week before the resumption of talks, scheduled on Nov 29, on reviving the JCPOA in the Austrian capital, Vienna, aimed at persuading Iran and the United States to re-adopt commitments under the JCPOA, in exchange for the lifting of U.S. sanctions against Iran.– NNN-IRNA