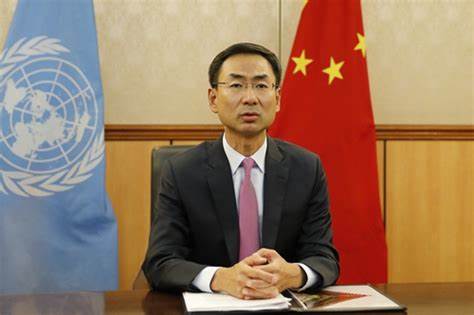 UNITED NATIONS, Nov 24 (NNN-XINHUA) – Chinese envoy to the UN yesterday called on all Iraqi factions, to address their disputes over last month’s elections, through legal means and work towards the formation of a new government.

China condemns the Nov 7 attack on the Iraqi prime minister’s residence, and expresses concern over the recent threats of violence against Iraq’s Independent High Electoral Commission and UNAMI, he told the Security Council.

“We hope that all parties in Iraq will stay calm and exercise restraint, express their demands and resolve their differences and disputes through peaceful means, within the framework of the Constitution and laws,” said Geng. “China encourages all factions in Iraq to seize the opportunity presented by the elections, to build consensus, strengthen solidarity, and form a new government in an orderly manner, so as to lay a solid political foundation for further progress in nation-building and achieving development and prosperity.”

The security situation in Iraq remains grave with frequent attacks launched by remnants of the Daesh. The international community should sustain its unwavering support for Iraq’s counter-terrorism efforts. The countries concerned should shoulder their responsibilities by facilitating early identification and repatriation of foreign terrorists and their families in Iraq, he said.

On Nov 4, Iraq’s UN ambassador wrote to the president of the Security Council, listing Turkey’s alleged violations of Iraqi territory and air space, during the period from June to Sept this year. The UN secretary-general’s report on Iraq also documented Iraqi civilian casualties from airstrikes and shelling. China hopes that Iraq’s sovereignty and territorial integrity would be respected by all countries, said Geng.

China appreciates and supports the continued close cooperation between Iraq and Kuwait, on the issue of missing persons and property, he added.

China has always been a sincere friend of the Iraqi people. The fourth shipment of assistance from the Chinese government, containing one million doses of COVID-19 vaccines has arrived in Baghdad. China will work with the rest of the international community, to continue supporting Iraq in fighting the pandemic, developing the economy and improving people’s livelihood, said Geng.– NNN-XINHUA

82.7 Per Cent Of Adolescent Population In Malaysia Fully Vaccinated