Covid-19: Millions of Argentines do not show up for their second doses of vaccines

Home - Americas - Covid-19: Millions of Argentines do not show up for their second doses of vaccines 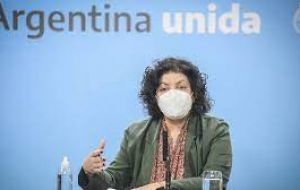 BUENOS AIRES, Nov 22 (NNN-MERCOPRESS) — Argentine Health authorities expressed a growing concern after over 8 million people who received the first dose of COVID-19 vaccine failed to show up at their scheduled appointments to complete the immunization cycle, it was reported.

According to the latest data, 35,938,527 Argentines have received the first dose but only 27,854,806 went to get the second injection even though there is more than plenty supply to meet that requirement that 8,083,721 people have failed to take.

Argentine authorities also expressed they were facing no logistics troubles administering a third dose as per the recommendations issued by the Health Ministry. Only 1,043,935 people have turned up for their booster shot.

Starting in November, Argentina has also been vaccinating children aged 3 to 11, most of whom are still to take their second injection, it was reported.

Among people aged over 60, the difference between those who received one and two doses is minimal: from 6,800,000 to 6,500,000, according to press reports. But the younger the patients the larger the gap between doses, with 2,774,829 people still needing to complete their schemes in the age group between 18 and 39 years, according to Health Strategies Undersecretary Juan Manuel Castelli.

Meanwhile, doctors insist patients with just one dose cannot be considered even partially protected against the Delta variant and on the other hand the world was moving towards considering a complete vaccination scheme to consist of three doses since drugs such as Pfizer’s or Moderna’s fall in their efficacy over time.

Regarding the reduction in the number of children taking their second doses, experts quoted by Infobae say it might be due to “The Vizzotti effect”.

Health Minister Carla Vizzotti had announced the Sinopàhrm vaccine to be used on Argentina children aged 3 to 11 had been tried successfully on millions of Chinese children, which turned out to be untrue, thus leading parents to distrust any other announcement as to the trustworthiness of the treatments. — NNN-MERCOPRESS

AmBank Welcomes Kick Off of URUS