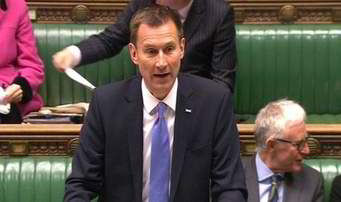 ADEN, Yemen, March 6 (NNN-SABA) – The Saudi-backed Yemeni government, said in an official statement on Tuesday, that, it will not accept handing over the management of Hodeidah province to a “neutral authority.”

In a statement published through the Foreign Ministry, the government reaffirmed its legitimate right to manage all the facilities in Hodeidah, following the withdrawal of Houthi rebels from the city, as declared in the Stockholm’s deal.

The government’s statement came, in reaction to previous remarks made by the British Foreign Secretary, Jeremy Hunt, after his first official visit to the southern port city of Aden.

Hunt said that, the Houthis had suggested handing over Hodeidah to “a neutral control,” following their withdrawal, for fear of military advancement by government forces.

“All the Yemeni laws, along with the international resolutions enshrine the exclusive right of the government, in running the affairs of the country and extending control over all the country’s sovereign territory, including Hodeidah.”

The government also said, the Stockholm Agreement stipulates that “Hodeidah’s authority (after the Houthis’ withdrawal) should remain in the hands of the security forces, as per the Yemeni law” and that Hunt’s talk about “neutral control” is an odd interpretation of that agreement.

The statement concluded that the task of the international community is to “implement the Stockholm Agreement, not to interpret it in contradiction to its content.”

Yemen’s Houthi rebels reacted to Hunt’s remarks and accused the British government of seeking to derail a fragile peace deal in the Red Sea port city of Hodeidah.

“We do not consider Britain as a mediator in the Yemeni peace talks,” Houthi spokesman, Mohammed Abdulsalam, said, in response to remarks made a day earlier by Hunt.

Abdulsalam added, “It also appeared that the UN Special Envoy to Yemen, Martin Griffiths, was representing his British government more than representing the UN.”

Speaking from the southern port city of Aden, Hunt warned that the peace process in Yemen faces a last chance and could die in weeks, if the Stockholm deal was not fully implemented.

Both warring parties have yet to implement the UN-brokered plan to pull out forces from inside and around the city, since the deal went into force on Dec 18, 2018.– NNN-SABA