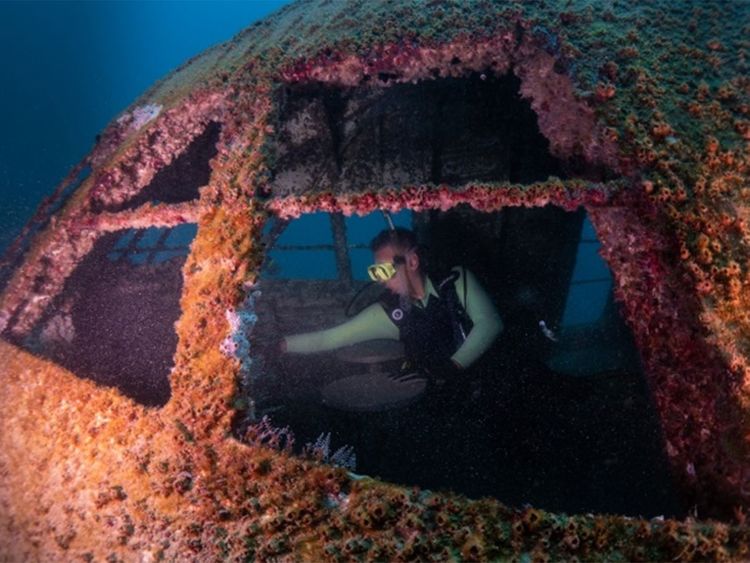 The initial phase of the project has been completed recently, by submerging a 70-metre long Boeing 747, 20-22 metres below the water North of Bahrain, to become the first attraction of the 100,000 m2 theme park area.

The Industry, Commerce and Tourism Minister said, the underwater theme park is considered the largest in the world and aims to further boost tourism within the strategy of Bahrain Tourism Authority (BTA) to promote the sector by availing of beaches and islands in Bahrain.

He expressed hope the project would yield economic dividends, pointing out that the park’s location was chosen according to the highest marine environment safety standards in consultation with the registered dive centres, which were able to ensure all safety requirements are fully met to guarantee a safe diving experience and environment necessary for the public.

During the official opening of the theme park, the Minister of Industry, Commerce and Tourism, the Chief Executive of the Supreme Council for Environment, Dr Mohammed Mubarak Bin Daina, along with a number of professional divers carried out an inaugural dive in the park to experience the magnificent underwater aircraft structure.

Earlier, the Ministry announced that the dive park would be open to the public on Saturday, Sept 7, 2019, and renewed its invitation to those who wish to book their underwater dive experience with any of the registered dive centres listed on the website www.divebahrain.com.

The dive park will include several structures in addition to the aircraft, such as a replica of a traditional Bahraini pearl merchant’s house, which is being overseen and sponsored by Diyar Al Muharraq, an artificial coral reef and other sculptures that will be fabricated and submerged to provide a safe haven for coral reef growth and a habitat for sustainable marine life.

The eco-friendly park will also provide researchers with rich information and data on marine ecology and biology, and will enhance environmental awareness on the importance of preserving marine life.– NNN-BNA

Brazil, Argentina agree on free trade in automotive sector by 2029

Russian manager ‘held in Naples for spying’ requested by US – media