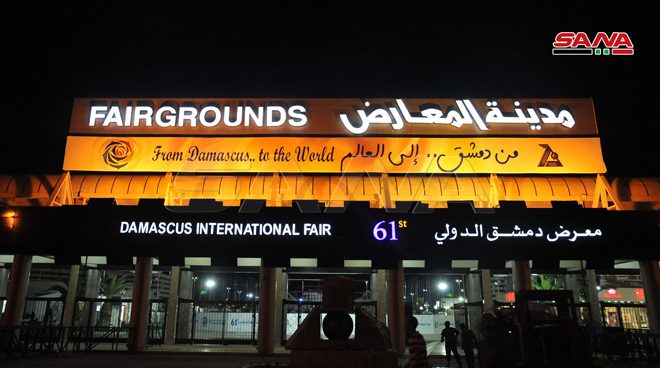 At the Chinese pavilion in the Damascus’ fair, several companies showcased their products, which are mainly related to the reconstruction process in Syria.

Jing Zhichun, business manager of Shanghai Shangqi Group, said, she is optimistic about her business in Syria.

“I think once the situation here got stabilised, there will come a fast-developing and growing market. I’m very optimistic about it,” she said.

For her side, Zhou Dongyun, general director of China City of Syria’s Adra Free Zone, said, the country still needs international support in the post-war time.

“To start some big projects here still needs international support and aid,” she said. “We are focusing on projects that could improve people’s livelihood.”

“Their feedback on our products is quite good. Because our products here are first-tier in our province, even in the whole of China. Here, we offer preferential prices with good quality,” he said.

Chinese participation is not only confined to the reconstruction materials, as Chinese cars have become so popular with high demand in Syria, because of their good quality and affordable prices.

“Now, in the Syrian market, there are many Chinese brands … it’s a good investment environment and hopefully the number of Chinese brands will continue to grow,” he said.

“The Chinese brands provide great quality at good prices, since the Syrian economy went through recession and the purchasing power of people has decreased,” he said.

Meanwhile, Hussein Arnous, minister of Water Resources, said on the sideline of the fair that, the Syrian government pins big hopes on China for the reconstruction process.

With the participation of hundreds of foreign and local companies, despite the U.S. warning of sanctions, the 61st round of the Damascus international trade fair kicked off in the Syrian capital, Damascus, on Aug 28.

Several companies from China, Russia, Iran, Belarus, and India are taking part in the fair.

Companies from the United Arab Emirates participated in the fair for the first time, since the beginning of the Syrian crisis, more than eight years ago.

On Aug 22, the U.S. embassy in Damascus posted calls on its social networking platforms, for boycotting the fair and threatened sanctions against companies that take part in the fair.

However, the Syrian government has repeatedly stressed that it will turn to friendly countries, to overcome the negative impacts of the sanctions, which it says are “unfair and target the livelihood of Syrians.”– NNN-SANA