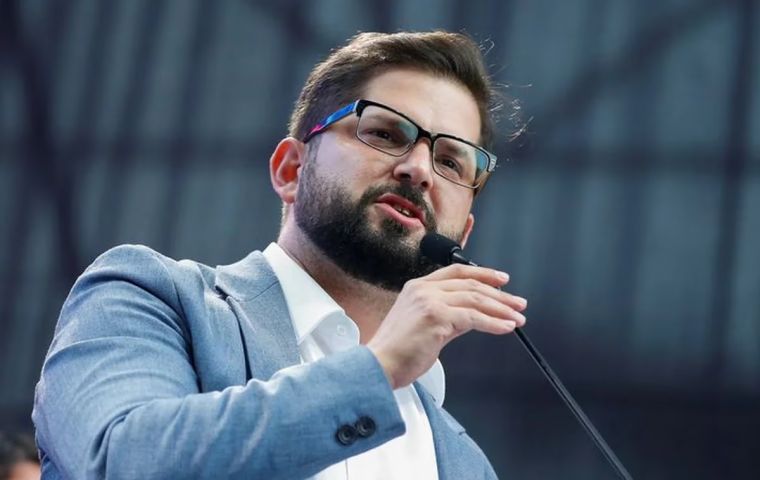 BUENOS AIRES, Jan 25 (NNN-MERCOPRESS) — Chilean President Gabriel Boric Font called for free elections in Venezuela and said he was willing to sponsor dialogue between the administration of President Nicolás Maduro and the opposition. He also said he hoped Venezuela would soon once again participate in multilateral forums.

During his speech at the VII Summit of the Community of Latin American and Caribbean States (Celac), Boric also called for the release of political opponents still detained in Nicaragua.

Regarding the “unacceptable” crisis in Peru where nearly 50 protesters have been killed since Dec. 7, Boric insisted that the country needed a “change of course” to put an end to the increasing violence. “We cannot be indifferent when today in our sister nation of Peru people who go out to march and demand what they consider fair end up shot by those who should defend them.”

“The balance left by the path of repression and violence -after the failed self-coup of former president Pedro Castillo- is unacceptable,” Boric stressed.

Since his accession to power, Boric has harshly criticized authoritarian regimes in the region, due to which he is perceived as the new Latin American left.

“The policy of exclusion does not offer authentic or lasting results. This is demonstrated by the history of our Latin America and the Caribbean with the ignominious blockade of the United States to Cuba and more recently to Venezuela,” Boric also pointed out.

Boric also called for free, fair, and transparent elections in Venezuela next year and expressed his government’s desire to “collaborate in the dialogue between the different sectors of the country to find a way out” of the crisis.

“Outside of democracy there is no freedom or dignity possible,” Boric also explained. ”The dictatorship (in Chile) taught us abruptly, with blood and fire, the effects of relativizing democracy and human rights,“ added Boric while condemning human rights abuses ”regardless of the political sign of whoever governs.“

In Boric’s view, ”democracy must be respected, especially in free elections when those with whom I disagree win, and human rights are civilizing advances that must be respected.” — NNN-MERCOPRESS

Malawi asks WHO for 7.6 million doses of cholera vaccine