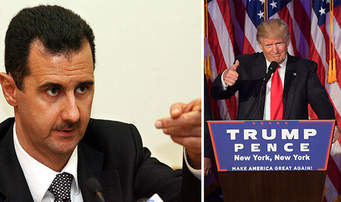 Assad made the remarks at a meeting with visiting Iranian Foreign Minister, Mohammad Javad Zarif.

The Syrian leader said that, such move was “a continuation of the wrong U.S. policies” that could be regarded as one of the major factors of instability in the region.

For his part, Zarif condemned the decision by U.S. President Donald Trump, to recognise Israel’s sovereignty over Syria’s Golan Heights.

Both sides agreed that, the policies of the U.S. and some Western countries will not dissuade Iran and Syria from continuing to defend their own interests.

At the meeting, they also discussed the upcoming Astana talks on Syria, and underlined the need for continuing coordination between both countries, to achieve the Syrian national interest.

They also discussed the agreements signed by both countries, and the ways to overcome the obstacles.– NNN-SANA