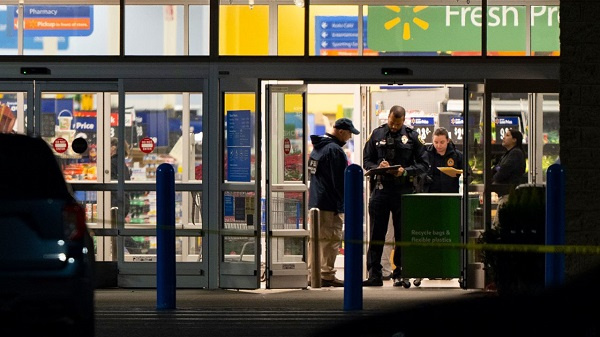 CHESAPEAKE (Virginia, US), Nov 24 (NNN-AGENCIES) — The gunman who killed six people at a Walmart in Virginia on Tuesday was himself the store manager identified as 31-year-old Andre Bing. He then committed suicide.

Bing was a “team lead” for the Chesapeake, Virginia, Walmart’s overnight shift, sources said. However, police have yet to publicly identify the shooter, except disclosing that the shooter was an employee of the store, said Chesapeake Police Chief Mark Solesky.

The manager had worked at Walmart since 2010, the source said.

The motive behind the massacre remains a mystery.

The deadly rampage started around 10:12 p.m. Tuesday, less than an hour before the Walmart Supercentre was set to close.

Investigators swept the store overnight into Wednesday, searching for victims or people who may have been hiding, Chesapeake Police spokesperson Leo Kosinski said.

The Thanksgiving week massacre marks yet another mass shooting in a place traditionally seen as safe – from schools to hospitals to stores.

Just 170 miles west of Chesapeake, a 22-year-old student at the University of Virginia in Charlottesville allegedly opened fire on fellow students this month, killing three of them on a bus returning to campus from a field trip to Washington, DC.

Last weekend, a 22-year-old shot and killed five people at an LGBTQ nightclub in Colorado Springs, Colorado, and 19 others were injured, authorities said.

Tuesday’s shooting happened as the US has recorded more than 600 mass shootings so far this year, according to the Gun Violence Archive.

The Washington, DC, field office of the Bureau of Alcohol, Tobacco, Firearms, and Explosives is assisting local police in the investigation, the bureau said on Twitter. — NNN-AGENCIES

Zanzibar to pay Thai company $69m for rice bought in 1988