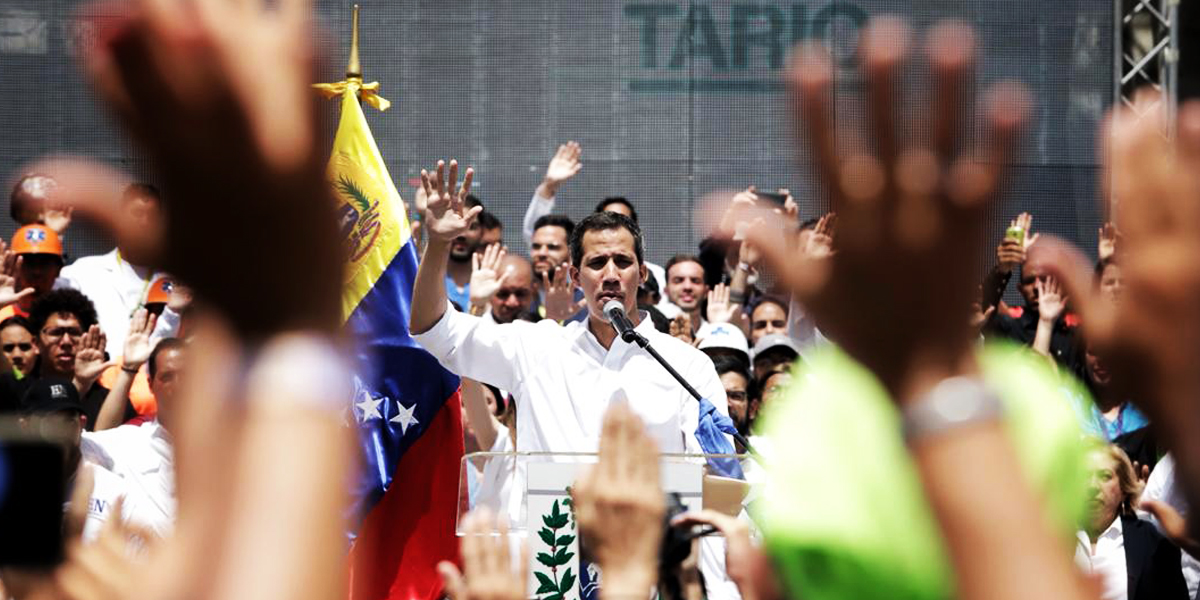 CARACAS, April 7 (NNN-AGENCIES) — Venezuelan opposition leader Juan Guaido on Saturday launched what he promised will be a “definitive” escalation of pressure to force the country’s embattled leftist leader from office.

Addressing a giant anti-government rally in Caracas, Guaido — whose claim
to be interim president is supported by around 50 nations — kicked off what he called “Operation Liberty,” his plan to oust President Nicolas Maduro.

“Everyone to the streets, let’s start the final phase of the end of the
usurpation!” he told supporters, speaking from the back of a pickup truck.

He called for a huge nationwide turnout on Wednesday, and urged his
followers to redouble their efforts to maintain pressure in the streets.

“The greatest escalation of pressure we have seen in our history” has
begun, Guaido said.

The call comes amid massive blackouts and the collapse of water supplies
affecting the nation, further exacerbated a growing political crisis.

The United States meanwhile has stiffened its economic sanctions against
Maduro, and one top US official warned Venezuela’s military that it must
protect the rights of peaceful protesters.

At the rally, Guaido also warned Cuba’s President Miguel Diaz-Canel that
the supply of subsidized Venezuelan oil to the Caribbean communist island
nation was over.

Venezuela has been sending cheap oil to Cuba in exchange for labor from
Cuban doctors and teachers, but Guaido said the oil was actually financing a Cuban intelligence group known as G2 that was cracking down on Maduro opponents in the Venezuelan military.

“The exploitation of Venezuelan oil is over, so Mr Diaz-Canel… Venezuelan
oil will not be used to submit and investigate our military officials”
through the G2, he told the crowd.

Pro-Guaido protests drew thousands in rallies across the country on
Saturday.

A pro-Maduro counter-demonstration in Caracas, with supporters dressed in red, drew a large crowd that gathered at the Miraflores presidential palace.

Later, he called upon Mexico and Uruguay to relaunch their proposal for
dialogue to resolve the crisis without foreign intervention. The two
countries had first introduced that idea in January.

Two opposition deputies were detained at an anti-government demo in the
western city of Maracaibo, but a few hours later Guaido announced that the
two had been released.

Elimar Diaz, a lawmaker who marched in Maracaibo, said the protest
there had encountered “brutal repression,” including tear gas canisters
dropped from helicopters, the use of National Guard armored vehicles and
attacks by members of the pro-government militia, known as “colectivos.”

Diaz said people in Maracaibo had gone “days without electricity” amid
“inhumane rationing” by the government.

Maduro has blamed US-backed sabotage for the massive blackouts that have deprived millions of power. The opposition blames a failure to maintain critical infrastructure.

Facing intense pressure at home and abroad, the Maduro government has
sought to weaken Guaido.

The government has stripped his parliamentary immunity, authorized his
prosecution for proclaiming himself acting president, and banned him from
holding public office for 15 years.

Guaido said earlier this week he feared that he could be abducted by
government agents.

Speaking to the pro-government Constitutional Assembly, Maduro’s top
lieutenant Diosdado Cabello slammed the US point man on Venezuela, Elliott Abrams, as an “assassin.”

“It is Abrams who should be in prison, condemned in the United States for
genocide in Central America,” said Cabello, referring to the US official’s
controversial role in the Central American conflicts of the 1980s.

Washington meanwhile kept up the international pressure on Maduro to step down.

“This is only a first step,” US national security advisor John Bolton
tweeted on Saturday in reference to the sanctions.

He cautioned the Venezuelan defense minister in a separate tweet of the
official’s “constitutional responsibility to protect innocent civilians who
are peacefully demonstrating,” adding: “Do not let the Cubans or the
‘colectivos’ inflict violence against Venezuelan patriots.”

Maduro is supported by the Venezuelan military, China and Russia.

Washington and its allies view the socialist president as illegitimate
since he took office in January for a second term following elections widely
seen as deeply flawed.

Washington has convened a UN Security Council for Wednesday to discuss the Venezuelan crisis.

Since Venezuela’s massive blackout of March 7, the country has been subject to repeated power cuts, with electricity being rationed outside of Caracas.

The blackouts have knocked out water supplies as well as transport and
communications, forcing many people to trim their work days to six hours. — NNN-AGENCIES