Presidents Tshisekedi, Kagame to meet in Angola over Congo conflict 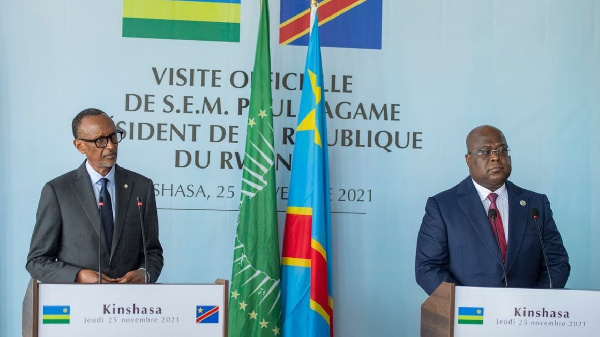 Angolan President Joao Lourenço, who is also the chairman of the International Conference for the Great Lakes Region (ICGLR), will hold talks with the two leaders with the aim of brokering peace between the two.

Rwanda and DR Congo have been at loggerheads following counter accusations of each country supporting different rebel groups in eastern DRC hostile to the other nation.

Kinshasa earlier accused Kigali of supporting the M23 incursion into its territory. An accusation that Rwanda denied. Congo labelled the M23 rebels a terrorist group. Rwanda in turn accused the DRC of supporting the FDLR rebels who are hostile against Kigali.

The relationship between the DRC and Rwanda has been deteriorating to an extent that Kinshasa demanded that Rwanda not contributed troops to the East African regional force that is meant to help stabilise eastern Congo.

The Wednesday meeting is part of a mediation strategy following the African Union’s decision to ask Lourenço to broker peace between the two states.

According to civil society in North Kivu, “50 military trucks from Rwanda” have crossed the border into the areas occupied by the M23 to support them”. And according to Bintou Keita, the head of Monusco, the rebels “have the military means of a real army”.

In Kinshasa, the coordinator of the new civil society, Jonas Tshiombela, believes that the DRC “must first impose itself militarily on the M23 before relying on the diplomatic option to resolve the crisis with Rwanda”.

According to President Kagame, who spoke on Monday about the conflict, the security problem cannot be solved only by force, but requires political solutions.

President Tshisekedi said that to resolve the conflict, all options, military and diplomatic, remain on the table. He said that “the will for peace and the willingness to engage in dialogue should not be seen as a sign of weakness”.

Following the escalation of the conflict that has had devastating consequences for civilians caught in the crossfire, NGO Amnesty International has called on all parties to the conflict to respect the rules of international humanitarian law.

It urged the parties to the conflict to do everything possible to ensure the safety of the population that has already suffered from the latest fighting in North Kivu. More than 80,000 people have fled their homes since the fighting began. — NNN-AGENCIES