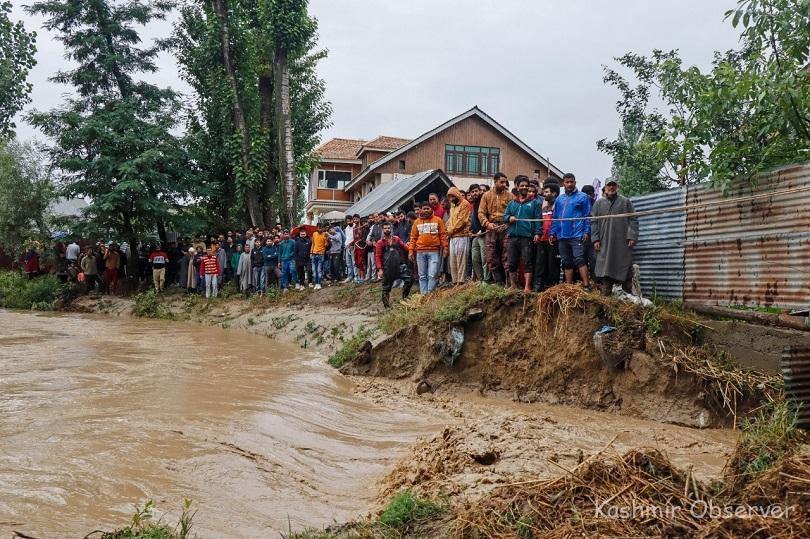 According to officials, the water level of the Jhelum river has crossed the flood alarm mark, at Sangam in Anantnag.

Reports pouring in from various places in the region said, water has entered various localities and inundated low-lying areas. Local authorities have evacuated residents from low-lying areas to safer locations.

“The non-stop rainfall across the region has triggered apprehensions of flood among the residents,” an official of the irrigation and flood control department said.

“The water level at Sangam in Anantnag district was measured at 18.18 feet yesterday, marginally above the 18-foot mark for flood alarm. Vaishov stream, which flows mainly through southern Kulgam district, was flowing dangerously above the flood alert mark.”

In the outskirts of Srinagar, the summer capital of Indian-controlled Kashmir, water entered a residential area, following a breach in the river bank. The locals were seen wading through the water and moving to safer locations.

Officials in Kulgam said, there was a breach in a temporary diversion, along the banks of Vaishov stream, following which, water entered the adjacent villages. A portion of a bridge and road has been washed away by the flood water.

The downpour brought down the day temperature substantially in the region. Srinagar recorded the coldest June day in almost 50 years, officials said.

Srinagar on Tuesday recorded a maximum temperature of 15.0 degrees Celsius, 14.2 notches lower than the normal for this time of the year.

Officials said, the Jammu-Srinagar highway remained closed for the second consecutive day yesterday, due to landslides triggered by heavy rains at various places. The situation has left hundreds of vehicles stranded on the road.

Flash floods triggered by heavy rains washed away the shuttering of an under-construction bridge and a 150-foot section of the highway.

Similar reports of landslides closing roads are pouring in from other places as well.

The incessant rainfall across the region forced the administration in many districts to suspend class work in schools.

Meanwhile, the meteorological department in Srinagar predicted an improvement in the weather in the region from today.– NNN-PTI