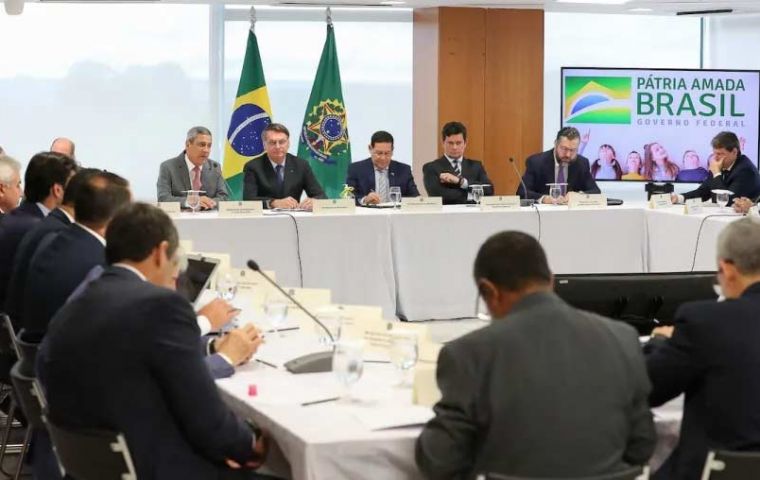 BRASILIA, May 17 (NNN-MERCOPRESS) — Brazilian President Jair Bolsonaro insisted on social media that he feared Argentina and Chile were following the paths of Venezuela and Cuba because although Fidel Castro and Hugo Chávez were already dead, the “consequences of communism” remained.

“Argentina and Chile are on the same path as Venezuela,” said Bolsonaro when commenting on his leftist colleagues Gabriel Boric Font and Alberto Fernández, who are both close to former Brazilian President Luiz Inácio Lula da Silva and is ahead in most polls to return to Brasilia’s Planalto Palace in the Oct 2 elections.

“Some still want that for Brazil,” said Bolsonaro while enclosing a video of migrants presumably from Venezuela and Cuba telling the hardships they had endured and explaining how they wired money usually to their relatives in their countries of origin on a regular basis.

A young Venezuelan woman recommended Brazilians to “not vote wrong” like those who voted for President Nicolás Maduro in her country.

All immigrants featured in the video posted by Bolsonaro were employees of Luciano Hang, a pro-Bolsonaro entrepreneur who runs for a seat on the Senate in October.

Bolsonaro also asked his followers to replicate the video’s method, by having immigrants “who fled socialism” tell their side of their story and to release their statements on social media to persuade voters.

A PoderData poll released last week gives Lula a first-round victory by 42% of the votes against Bolsonaro’s 35%, and 49% against 38% in the runoff.

Bolsonaro also pointed out during the weekend that all of his ministers have free rein to whatever they see best for the good of the country. He made those comments when asked about the possibility of replacing Petrobras’ president, which he has already done not so long ago.

“Ask Adolfo Sachsida,” Bolsonaro replied. “He is the Minister of Mines and Energy and deals with this. And I make it very clear: all my ministers, all of them, without exception, I give carte blanche to enforce whatever he thinks is best for his ministry to serve the population.” — NNN-MERCOPRESS