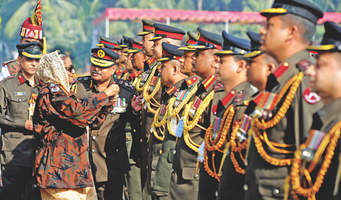 The day, a national holiday in Bangladesh, was celebrated with parades and paying of respect at Jatiyo Smriti Soudho, the national memorial at Savar, on the outskirts of Dhaka.

At dawn Tuesday, on behalf of the nation, President Abdul Hamid and Prime Minister Sheikh Hasina, paid tribute to martyrs of the Liberation War at the National Memorial in Savar.

The celebrations began with a 31-gun salute at dawn, by a smartly turned-out contingent, drawn from the Bangladesh Army, Navy and Air Force, while the buglers played the last post.

Wearing the red and green of the Bangladeshi flag, people of all ages and all walks of life also thronged the national memorial, to pay respect to the war heroes.

On March 26 every year, Bangladesh commemorates the country’s declaration of independence on late hours of March 25, 1971.

This year the government put in place tight security for the 49th Independence Day.

Additional law enforcement personnel have been deployed to strengthen surveillance, especially in Dhaka’s diplomatic Gulshan, Banani and Baridhara areas, since Sunday afternoon, after threats of militant attacks were reported.