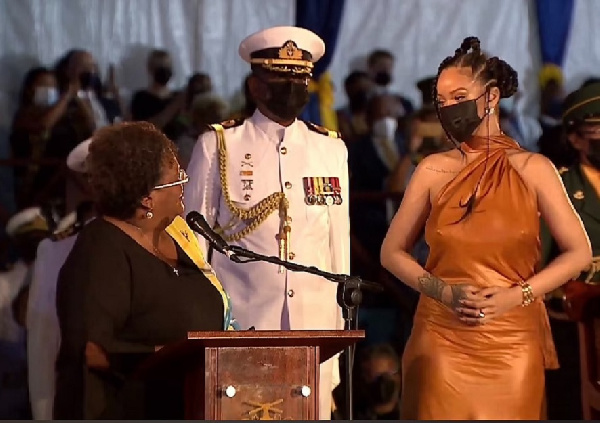 BRIDGETOWN, Dec 1 (NNN-AGENCIES) — Rihanna was conferred with a national hero honor by her home nation of Barbados during the country’s historic republic declaration ceremony on Tuesday.

The event was held in the capital city of Bridgetown, and the acclaimed R&B singer and business mogul joined her compatriots to officially commemorate the Caribbean nation cutting its colonial-era ties with the British monarchy after almost 400 years.

The 33-year-old was conferred “the order of national hero” during the celebrations. And her recent honor comes after the island nation named her as an ambassador in 2018.

Videos that were shared on social media showed the singer joining Prime Minister Mia Mottley on stage to accept the honor.

“On behalf of a grateful nation, but an even prouder people, we, therefore, present to you, the designee, for the national hero of Barbados, ambassador Robyn Rihanna Fenty,” said Mottley. “May you continue to shine like a diamond and continue to bring honor to your nation by your words, by your actions, and to do credit wherever you shall go.”

The Umbrella singer is now the 11th national hero in Barbados as well as the second woman to receive such an honor from the Caribbean nation. The conferment also means she can now use the title, “The Right Honorable.”

The historic ceremony was attended by hundreds of people, and the declaration of the newest republic at the stroke of midnight was met with pomp and pageantry as well as a unique display of the island nation’s culture, per Al Jazeera. As part of the ceremony, Sandra Mason was also sworn in as the first-ever president of Barbados.

In September last year, Barbados announced its intention to remove Queen Elizabeth II as head of state and replace her with a native Barbadian. The British monarch had been the island nation’s head of state since it gained independence in 1966. — NNN-AGENCIES

Cambodia’s Agricultural Exports Up 87 Percent In 11 Months Of 2021: Minister