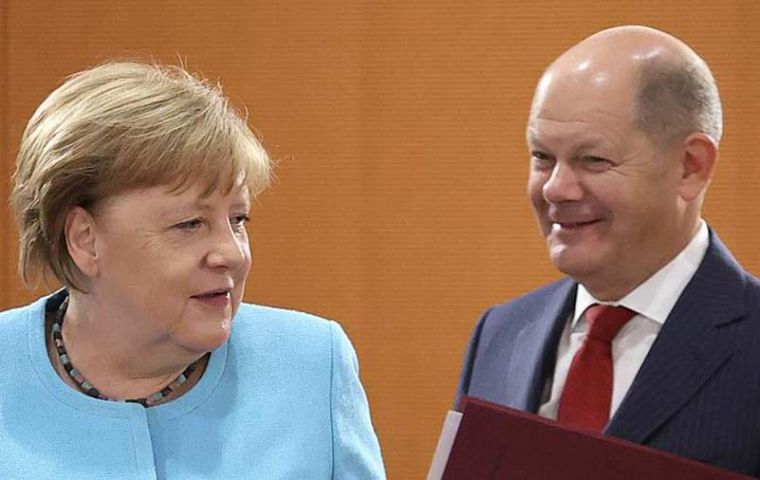 BERLIN, Nov 25 (NNN-AGENCIES) — Although it actually came as no surprise, Germany’s leading political parties agreed that current Vice-Chancellor and Finance Minister Olaf Scholz of the Social Democratic Party (SPD) will take over from Angela Merkel of the Christian Democratic Union (CDU) after 16 years in office.

The SPD, the Greens, and the liberals of the Free Democratic Party (FPD) had been negotiating a government coalition since the SPD narrowly won the Sept 26 elections. If ratified, the new political front will replace the “Grand Coalition” made up of the SPD and Merkel’s conservative bloc of the CDU.

The 63-year-old future Chancellor has pledged to make the COVID-19 pandemic and climate change the two most important issues for his administration, in addition to a sovereign Europe, friendship with France, and an alliance with the United States.

Scholz has been Finance minister and vice-chancellor since 2018.

As per the new coalition agreement, the Greens will take over the Ministries of Foreign Affairs and Environment and the FDP will be in charge of Finance.

The future Government has already disclosed plans to return “in 2023” to strict budgetary rules and also to move ahead of the end of coal as a source of energy from 2038 to 2030.

Christian Lindner, the head of the pro-business FDP, is set to be the next finance minister, according to the deal announced Wednesday. Annalena Baerbock and Robert Habeck of Green affiliation are poised to take on the roles of foreign minister and economy and climate minister, respectively.

The new coalition has been dubbed “the traffic light” due to the colors each party is known for.

Under the new Government, foreign immigrants shall be eligible to apply for German citizenship after five years in the country, it was announced.

The new coalition also said it would launch a parliamentary investigation into the Afghanistan evacuation operation. The country will remain part of NATO’s nuclear-sharing agreement under the new government, and the Greens will have the right to nominate the country’s European commissioner if the EU Commission’s president is not from Germany, as is currently the case with Ursula von der Leyen.

The parties have vowed to modernize Europe’s largest economy with a priority placed on the transformation into a greener, more digitalized country. — NNN-AGENCIES