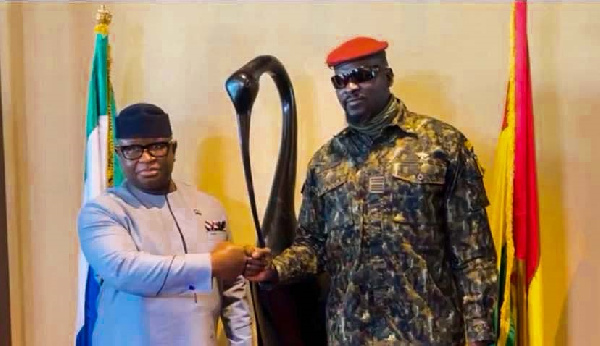 Maada Bio, himself a former junta leader turned democratic president, was in Conakry over what he said was ‘security co-operation.

“The people of Guinea supported Sierra Leone through our most difficult times. Our meeting today on security co-operation was very fruitful. We will continue to engage and support the ECOWAS transition framework,” Maada Bio wrote in a tweet accompanied by photos of his meeting with Mamady Doumbouya, leader of the Guinea junta.

It was reported that President Maada Bio engaged Doumbouya about defence issues between the two countries.

“He becomes the first head of state to visit the country since ECOWAS slammed sanctions on the regime following the takeover.”

According to a presidential source in Freetown as saying Bio was specifically going to push for the final resolution of the issue of the disputed border town of Yenga and the joint security patrols along the two countries’ borders which stalled following the September coup.

Guinea drew the ire of the regional bloc, ECOWAS, which slapped a suspension on then following the Sept 5 coup that ousted President Alpha Conde.

They have also been suspended from the African Union as has Mali also – where Colonel Assimi Goita executed two coups in a space of nine months before swearing himself into office as transitional president. — NNN-AGENCIES