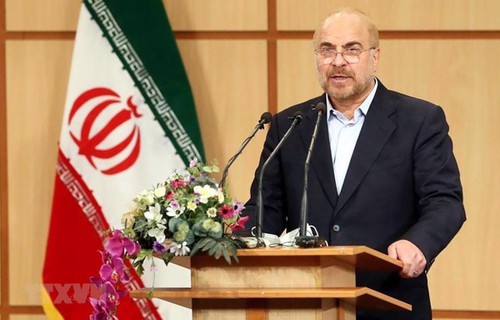 TEHRAN, Oct 12 (NNN-IRNA) – The speaker of Iran’s parliament said here yesterday that, any dialogue regarding the 2015 nuclear agreement must lead to the lifting of the sanctions against Iran.

“The United States withdrew from the agreement during the Trump era, and it was surprising that the world did not react well to the U.S. move,” Mohammad Baqer Qalibaf said in a meeting with visiting President of Swiss National Council, Andreas Aebi, as quoted by semi-official Mehr news agency.

After the United States withdrew from the nuclear deal, formally known as Joint Comprehensive Plan of Action (JCPOA), in May 2018, “some countries claimed that this was an individual decision taken by former U.S. President, Donald Trump, but the Iranian authorities and people never accepted such claim,” he added.

Under the current U.S. administration, the same policy of “maximum pressure” against Iran has in fact continued, “only with a different rhetoric,” Qalibaf said.

Iran’s Strategic Action Plan to Counter Sanctions and Protect the Rights of the People, passed as law by Iran’s parliament in Dec, 2020, requires Tehran to get assurances that the U.S. “maximum pressure” against Iran will be abandoned before resuming full compliance with the JCPOA.

The first step for the reactivation of the JCPOA must be taken by the United States, and a “compliance-for-compliance” principle must be followed, the Iranian speaker said.

He stressed that Iran must see the economic benefits of the agreement effectively, not only in the form of statements on paper.– NNN-IRNA