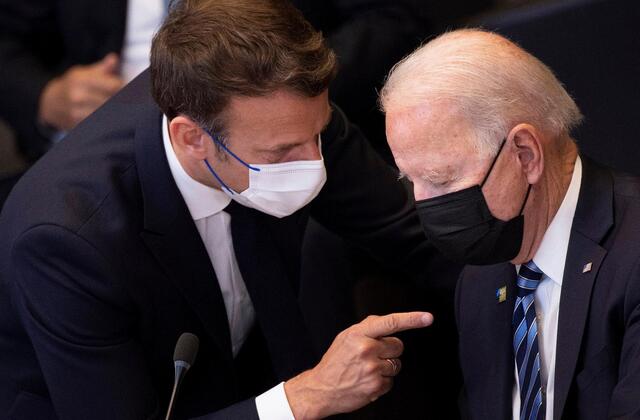 WASHINGTON, Sept 23 (NNN-Xinhua) — US President Joe Biden held a phone call with his French counterpart Emmanuel Macron on Wednesday in an attempt to defuse a diplomatic rift caused by a controversial submarine deal with Australia.

The White House said in a joint statement between the two countries that Biden requested the call with Macron to discuss “the implications of the announcement on September 15.”

The United States and Britain announced on Sept 15 that they would support Australia to develop nuclear-powered submarines, depriving France of a contract to provide conventional submarines to Australia.

Outraged by the abrupt move without consultations, France recalled its ambassadors to the United States and Australia on Friday in protest.

“The two leaders agreed that the situation would have benefitted from open consultations among allies on matters of strategic interest to France and our European partners. President Biden conveyed his ongoing commitment in that regard,” said the joint statement.

“The two leaders have decided to open a process of in-depth consultations, aimed at creating the conditions for ensuring confidence and proposing concrete measures toward common objectives,” it added.

Macron ordered the French ambassador to return to Washington next week and “start intensive work with senior US officials,” according to the joint statement. Biden and Macron agreed to meet in Europe in late October to “reach shared understandings and maintain momentum in this process.”

US media noted that the joint statement suggested regret by the Biden administration over how it handled the issue.

The phone call came a week after the United States, Britain, and Australia unveiled a new trilateral security partnership known as “AUKUS,” which lists a nuclear submarine fleet for Australia with US and British technology a top priority.

Australia then announced it would scrap the deal with France signed in 2016 to purchase 12 conventional diesel-electric submarines.

French Foreign Minister Jean-Yves Le Drian called the trilateral move a “stab in the back” and a “crisis of trust” between allies that requires explanations. — NNN-XINHUA

INNIO Publishes Its Inaugural Sustainability Report, Underscoring INNIO’s Commitment as a Contributor to a Sustainable and Greener Energy Future