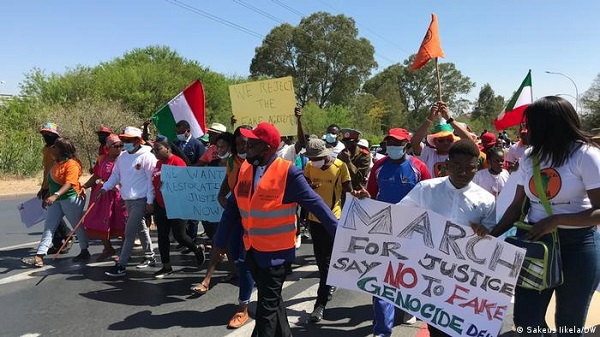 WINDHOEK, Sept 23 (NNN-GNA) — Namibia’s parliamentary debate on the agreement on the reappraisal of the German colonial period, which is ready to be signed, resumed Wednesday afternoon.

Parliamentary Speaker David Nahongandja said that he hoped a vote could take place in the coming days.

The vote had been delayed after parliamentary sessions had to be suspended in June due to rising coronavirus numbers.

According to Nahongandja, opposition members repeatedly interrupted the government’s presentation of the agreement in parliament on Tuesday.

About 300 people protested outside the parliament building against the proposed agreement, which they described as a “sell-out” in a petition handed over to parliament.

More than 100 years after the crimes committed by the German colonial power in what is now Namibia, the German government has in the agreement recognized the atrocities committed against the Herero and Nama ethnic groups as genocide.

Germany wants to officially ask the descendants for forgiveness and support them with 1.1 billion euros (1.3 billion dollars) over the next 30 years.

This was preceded by years of negotiations. The German Reich was the colonial power in what was then German South-West Africa from 1884 to 1915 and brutally put down rebellions.

During the Herero and Nama War from 1904 to 1908, there was a mass murder that is considered the first genocide of the 20th century.

Since 2015, the German Foreign Office has used the term genocide for this in its general language. Now the atrocities have also been officially described as genocide.

The German government had repeatedly emphasized that, in its view, there was no legal entitlement to compensation. — NNN-GNA

EU to step up cooperation with Colombia in peace process