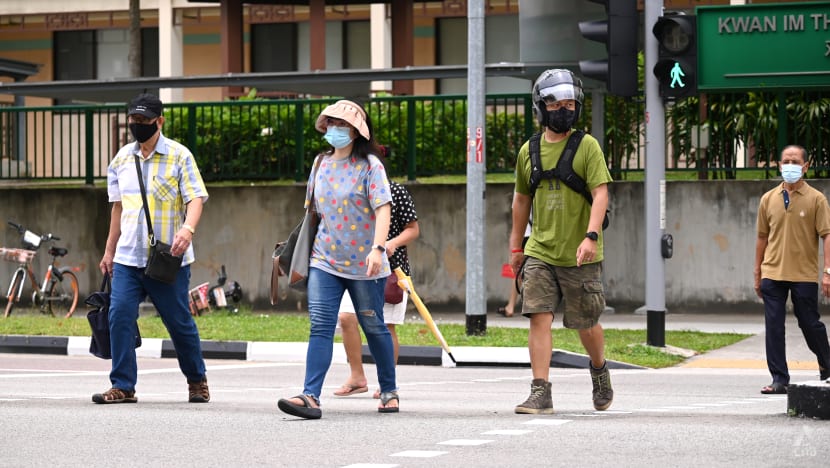 Among the new local cases, 241 were seniors above the age of 60, said the Ministry of Health (MOH).

There was also one imported case, taking the total number of new infections reported on Friday to 935.

MOH said that it was monitoring a total of 12 large clusters with new cases.

The cluster was caused by workplace transmission with further spread to household contacts of cases, said MOH.

An existing cluster at Sembcorp Marine Tuas Boulevard Yard has grown to 107 after two more cases were linked to it.

Most of the cases in this cluster are residents of 38 Kian Teck Drive dormitory and all new cases have been quarantined, said the Health Ministry.

The cluster at Orange Valley Nursing Home in Simei has grown to 17, all of them residents.

A total of 256 cases have been linked to the Chinatown Complex cluster. The cases comprise 187 stallholders and assistants, 11 cleaners or safe distancing ambassadors, and 58 household contacts of workers.

The cluster at Blue Stars Domitory has grown to a total of 71 cases while the cluster at Avery Lodge Dormitory now stands at 95.

Two new COVID-19 cases were added to the Changi General Hospital for the first time since Monday, taking the total to 73.

The ministry added that there was “workplace transmission among facility management and support staff members”, including spread to close contacts of the hospital staff.

No patients were affected, MOH said.

In its COVID-19 update on Monday, the Health Ministry had said that cases at the hospital cluster were declining.

There were 813 patients warded in hospital, most of whom were well and under observation, said MOH.

Among those who have fallen very ill, 82 were seniors above the age of 60, said MOH.

Over the last 28 days, the proportion of local cases who were asymptomatic or had mild symptoms was 98.2 per cent.

MOH said 82 per cent of the population has completed their full vaccination regimen or received two doses of COVID-19 vaccines, while 84 per cent has received at least one dose as of Thursday.

More than 8.9 million doses of vaccines have been administered under the national vaccination programme, covering about 4.56 million people, of whom 4.43 million have completed the full regimen.

Another 181,531 doses of other vaccines recognised in the World Health Organization’s emergency use listing have been administered, covering 86,891 people.

As of Friday, Singapore has reported a total of 75,783 COVID-19 cases and 59 deaths from the disease.

Ong noted on Friday that it is currently day 26 of the current wave, and that daily cases have been doubling about every week.

“I think let’s be prepared to likely cross the 1,000 mark soon. It is not unexpected, it’s a typical behaviour of a transmission wave that typically peaks between four and up to eight weeks, or 30, 40 sometimes 50 days,” he said. — NNN-CNA